Influence of soft drinks on dental enamel: An in vitro study

This in vitro study was to evaluate the erosive potential of four soft drinks at different times on bovine teeth by profilometry. Bovine incisors buccal side was sectioned with a diamond saw and a total of 100 enamel blocks were prepared (8 × 4 × 0.5 mm). Five specimens each were exposed to 60 ml of soft drinks (Sprite, Coca Cola, Cappy-orange and Ayran) for 15, 30, 60, 120 and 180 minutes in a continuously vibrating soft drinks bath in a beaker at room temperature. Surface loss of the specimens was determined with a profilometry. The data were analyzed by two-way analysis of variance and Tukey HSD test. Loss of enamel was observed in Coca Cola, Cappy and Sprite groups. Coca Cola was significantly higher erosive potential in 180 minutes than other soft drinks (p < 0.05). Ayran was no sign of erosive potential in all time. It can be concluded that the composition of the beverages had a significant effect on dental erosion, so consumption of Ayran can be advised. 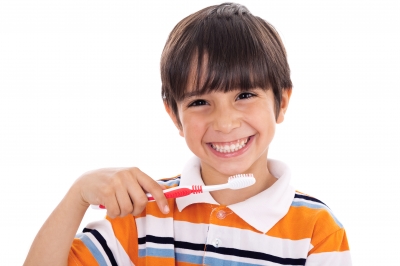 Dental erosion is defined as loss of tooth substance by chemical processes caused by a variety of extrinsic and intrinsic factors. Intrinsic factors are mainly caused by gastric acid reaching the oral cavity as a result of vomiting or gastro-esophageal reflux. Extrinsic factors are related to frequent consumption of acidic comestibles or drinks in daily life. In today's lifestyle the extrinsic factor is becoming more important in the etiology of dental erosion due to increased consumption of acid drinks as soft drinks, sport drinks, fruit juices and fruit teas.  This is because these drinks are based on fruits with high citric acid content and were found to have a highly erosive effect on dental hard tissues. According to diet and food surveys, over half of people suffered from between the age of 4 and 18 years exhibited signs of dental erosion; moreover, 46% of children aged 4-6 years had signs of erosion of their primary teeth. Demineralization of tooth by erosion is caused by thick contact between the tooth surface and acidic foods or beverages. Strategies to prevent dental erosion include reducing consumption of acidic foods and beverages and protect the teeth from erosive materials. Numerous reports on evaluation of enamel erosion have been published in the literature. Many of these studies have demonstrated enamel softening and/or loss of tissue after surface treatment with various acid solutions. Enamel erosion is measured by various methods including loss of enamel weight, SEM or light microscope, microradiograph or image analysis, electron probe analysis and profilometry.  However each method has limitations. For instance, some methods provide only qualitative information, some are very costly. Profilometry is a simple, rapid and cheap to measure the depth of the erosion. Clinical studies suggest that the length of time which the teeth are exposed to acidic environment is more critical to erosion than the volume of drink consumed. Moreover, the total acid level, acid type, concentration of phosphate, calcium and fluoride in the beverages have a modifying effect on the development of erosion induced by dietary components.  The purpose of this study was to evaluate the erosive potential of four soft drinks at different times on bovine teeth by profilometry.

A total of 100 freshly extracted bovine incisors were used. The teeth were disinfected by storage in a 5% sodium hypochlorite solution for 24 h after their roots and pulps had been removed. The teeth buccal side was sectioned with a diamond saw (İsomet, Buehler, Germany) and a total of 100 enamel blocks were prepared (8 × 4 × 0.5 mm). The enamel surfaces of the specimens were ground flat and polished with silicon carbide papers (grades 320, 600, 1500) (Wirtz, Buehler, Germany) under water irrigation. The centers of the polished surfaces were isolated with water-resistant band. The residue polished surfaces were covered with nail varnish. After nail varnish dried, the band was removed from the polished enamel surfaces. Five specimens each were exposed to 60 ml of Sprite (Coca-Cola Co., Istanbul, Turkey), Coca Cola (Coca-Cola Co., Istanbul, Turkey), Cappy-orange (Coca-Cola Co., Istanbul, Turkey) and Ayran (Yoruklar Inc., Balıkesir, Turkey) for 15, 30, 60, 120 and 180 minutes in a continuously vibrating soft drinks bath in a beaker (Are, Velp, USA) at room temperature. Specimens were then washed in running water and dried. Nail varnish was completely removed from the specimens surface with acetone. Surface enamel loss was determined with a profilometer (Crysta-Apeks, Mitutoya, Japan). For profilometric measurements the stylus moved across the eroded and uneroded enamel surfaces. The erosion depth is defined as the distance between the uneroded and the eroded surface. Each specimen was measured three times different part of the enamel surface and the average value of three measurements was calculated for each specimen. The data were analyzed by two-way analysis of variance and Tukey HSD test.

Table 1 shows the mean pH values and chemical concentrations of the soft drinks. The mean enamel loss of the specimens are presented on [Table 2]. There were no difference among Sprite, Coca Cola and Cappy in 15, 30, 60 and 120 minutes according to the erosive effects (p > 0.05). The Coca Cola had a higher erosive effect than other soft drinks in 180 minutes (P < 0.05). Ayran was no sign of erosive effect in all times.

The profilometric measurement for determining erosively induced dental hard tissue loss is a well-founded and an appropriate method for evaluation of the erosive potential of various acidic drinks.

In our study the most erosive potential was observed for Coca Cola and the least was Ayran. Ayran has higher concentrations of calcium and phosphate than the others and it showed no sign of erosion. These variables may be influenced by the concentrations of different ions, such as phosphate and calcium. However some studies have shown that beverage modification by addition of calcium is efficient in preventing erosion. The results of our study revealed that amount of calcium or phosphate was effective in reducing the loss of enamel.

The effect of the type of acid and the amount of ionized acids on mineral dissolution had been demonstrated earlier. The literature is contradictory regarding the erosive potential of beverages containing citric acid or phosphoric acid. Some studies have shown that beverages containing citric acid are more erosive than those containing phosphoric acid, while others have shown the opposite. All acids had different erosive effects on dental enamel. Several parameters have been previously identified as influencing the erosion process of acids against human dental enamel. From the literature it is known that mono-, di- and tricarboxylic acids interact with hydroxy apatite (HA) and chemically adsorb onto the enamel surface. This adsorption leads to a dissolution of Ca +2 ions out of the HA surface. Coca Cola contains phosphoric acid. Cappy and Sprite contain citric acid. Citric acid demonstrated severe demineralizing potential in several studies.  The erosive potential of citric acid is pronounced because of the fact that it acts as a chelator able to bind minerals of the apatite, such as calcium. In our study Coca Cola showed higher erosive potential in 180 minutes than Cappy and Sprite and this may be explained by its low pH and lack of calcium in its content.

The present in vitro study, however, cannot fully reproduce the clinical conditions, and should only be interpreted as a prediction of the relative erosive potential of a dietary substance. In the mouth, tooth surfaces are covered with the acquired pellicle, comprising many of the proteins present in saliva, and this pellicle has been shown to protect tooth surfaces against erosion.

In conclusion, the present study confirmed the erosive potential of soft drinks (Coca Cola, Sprite and Cappy) and tooth erosion had a significant relationship with pH, phosphate and calcium concentrations of drinks; so we can suggest consumption of Ayran.

More in this category: « Veneers for a perfect smile! No more fillings as dentists reveal new tooth decay treatment »
back to top